“It’s like my favorite mural in town!” exclaimed Sampson Levingston, admiring the black and white portraits of great Indianapolis jazz men on the side of a downtown music store. 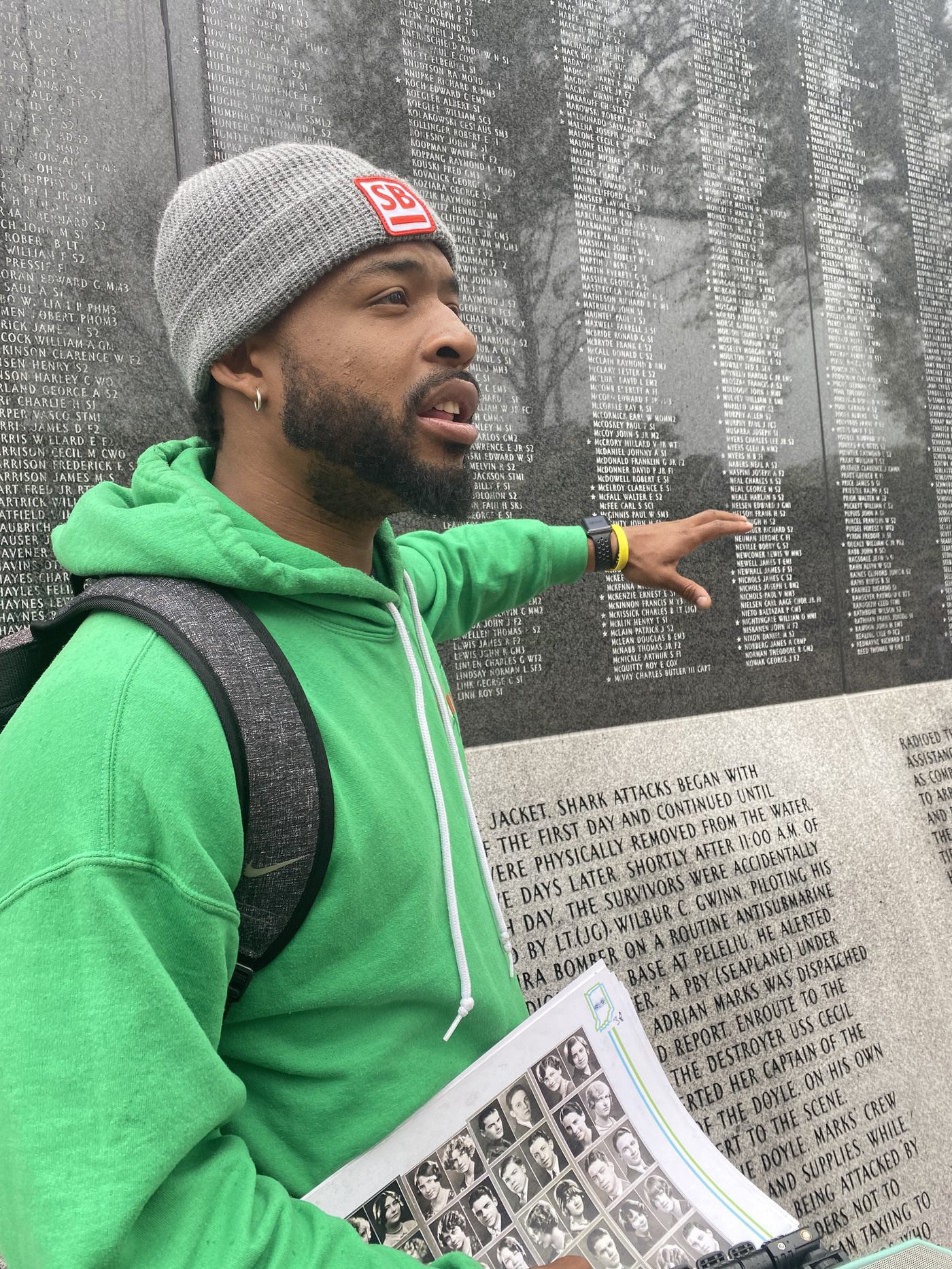 Through2Eyes’ Sampson Levingston runs walking tours that focus on the black neighborhoods and history of Indianapolis.

Levingston loves his hometown, but has known nicknames like “Indiana No Place” and “Naptown”.

“People found it so boring,” Levingston admitted on a recent tour of Indiana Avenue. “People would actually come downtown and shoot pigeons from light poles.”

But Indiana Avenue was once a thriving center of black trade and entertainment. The area was gutted by a motorway in the 1960s and 1970s. According to local news, hundreds of historic buildings were destroyed. But you can still see the former headquarters of Madam CJ Walker, who is said to be the first self-made millionaire to make and sell black hair products. And Indiana Avenue was full of nightclubs frequented by JJ Johnson, Wes Montgomery, and Freddie Hubbard. (Levingston’s Spotify list is right here. And Indiana Avenue itself was immortalized in this song by musician Larry Ridley.)

“You look up history books and you don’t see too many black people, so you say, ‘Where do I fit?'” Levingston mused. “Then you learn about the avenue and you think – I fit right in here.”

Levingston, a 26-year-old former NCAA Division I athlete, has always been a nerd digging stories about buildings and back streets in Indianapolis. He’s hanging out in archives for fun. But Levingston has no major in history. He was a major recipient in the state of Indiana and the captain of its soccer team. “I took all the history electives I could,” he says. “Sometimes I would even miss the practice to sneak into another history elective.”

By majoring in Marketing, Levingston learned how to spread the world through hiking tours. (He has an active Facebook page.) His Indiana Avenue tour included stops at the Senate Avenue Y historic site, once the largest black YMCA in the country. In the 1920s, when the Ku Klux Klan was a dominant force in local politics, it was home to an important progressive community organization. Then there is the large red brick Bethel AME Church near the canal in the city center. It is a former subway stop. And then the city’s brightly painted Black Lives Matter Mural, with the names of the victims of police violence written in each letter.

“Michael Taylor’s name actually appears four times on this mural,” says Levingston. This name is heavy with recent history. As early as 1987, the 16-year-old Taylor was picked up on suspicion of car theft. He was shot in the head and killed in the back of a police patrol car. He was handcuffed at the time. Police alleged the teenager died of suicide.

In 1996 the city paid Taylor’s mother millions of dollars in restitution. Part of this Indiana Avenue tour includes a visit to Nancy Taylor. She doesn’t talk about losing her son. Instead, Taylor shares childhood memories from her flower-filled front yard.

“We walked all the way up and down the street and there were shops and little places to buy cheeseburgers – woody burgers – and ice cream,” she recalls. “It was just a really old-fashioned neighborhood.”

When Taylor’s son was killed, Sampson Levingston wasn’t even born. His hiking tours grew out of a year of police violence, protests and the pandemic. There’s a reason they were so popular, he says. “We need each other as badly. More than we could ever have realized. We just miss that. We miss people. We miss being who we are. And who we are is important.”

Levingston led his tours through the cold winter of the Midwest. Now he leads them almost every spring day. He’s careful to keep people apart and safe outside in the fresh air – but in every other way his tours are the opposite of social distancing.

Beyond ‘In the Heights’, the colorism persists, is rarely addressed – WISH-TV | Indianapolis News | Indiana weather

5 bold predictions for Indianapolis Colts in 2021

Helio Castroneves wins his fourth Indianapolis 500 in front of 135,000 fans (corrected the...