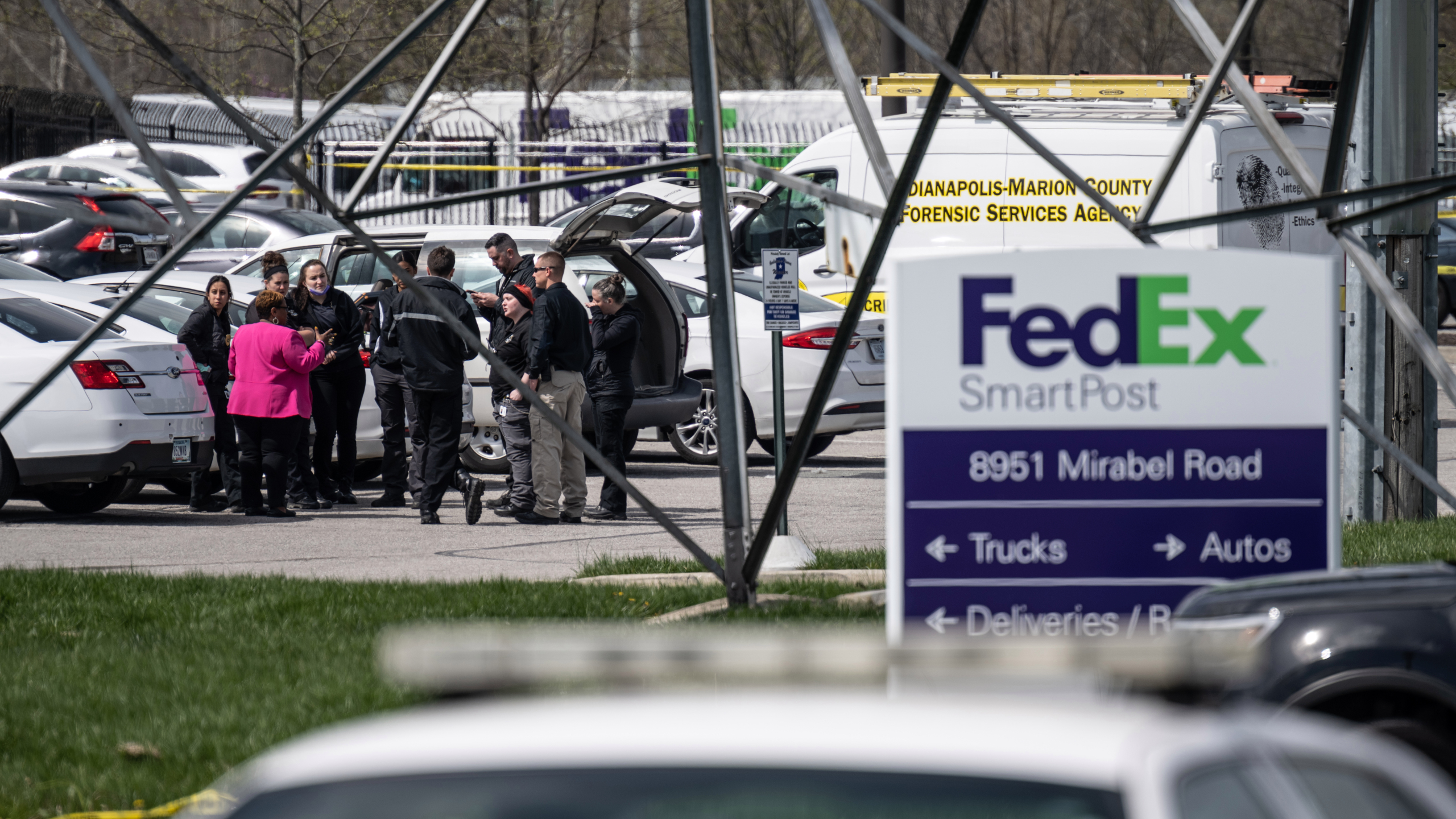 INDIANAPOLIS, IN – APRIL 16: A group of crime scene investigators gathers to speak in the parking lot of a FedEx SmartPost on April 16, 2021 in Indianapolis, Indiana. The area is the site of a mass shooting at the FedEx Ground Facility that killed at least eight people and injured five on the evening of April 15. (Photo by Jon Cherry / Getty Images)

On Thursday April 15, 19-year-old Brandon Scott Hole carried out a mass shooting killing eight workers at a FedEx facility in Indianapolis, Indiana. The perpetrator Brandon Hole was an employee at this FedEx location from August 2020 to October 2020. The Indianapolis Metropolitan Police Department’s assistant chief of criminal investigation, Craig McCartt, reported that Hole was found dead from a self-inflicted gunshot wound.

Chief McCartt also announced that the officers found the shooter active when they arrived around 11:00 p.m. and moved from the parking lot inside the facility. Half of the victims were found outside and the other half inside. Seven of the employees were injured but survived, five of whom were gunshot wounds and two of them sustained minor injuries.

Just over a year ago, in March 2020, Brandon Hole’s mother contacted law enforcement to raise concerns about her son. She told them that she was concerned about Hole’s sanity and that he could be a risk to himself. She specifically told them that he might even attempt suicide.

Law enforcement agencies responded to these concerns by confiscating a firearm found in Hole’s house. They also placed him in a temporary psychiatric situation. He was also interviewed by the FBI in April last year because of certain items in his bedroom.

During the FBI investigation, they reported that they had not found racially motivated violent extremism. However, on Monday Indianapolis police released reports of the search they conducted on Hole in March last year, and one of their officers reported finding what appeared to be white supremacist websites on his computer.

Despite the mother’s concerns, the FBI investigation, and the gun found, Hole was not classified under Indiana red flag law. The red flag law would have prevented him from owning another firearm in the near future. Despite confiscating the shotgun they found in his home, Hole legally bought two assault rifles just months later. These two assault rifles were the same ones he had used in the attack on the FedEx facility.

The communities of those who died in this incident have begun to gather across the country.

Of the eight dead, four were members of the Sikh community. Such an attack increases the fears American Sikhs have lived with for decades. A fear only grown from being attacked for wearing turbans and other cultural clothing and being attacked in her home of worship.

During an interview with CNN, Satjeet Kaur, executive director of the Sikh coalition, said, “It is very difficult for our community not to feel targeted, especially given the violence we have endured for decades.” She also said: “It was targeted at a facility known to be heavily populated by Sikh workers and the attack is traumatic to our community as we continue to experience senseless violence.”

The families of the victims came forward to tell them who each of them was. Jaswinder Singh recently started working at the FedEx facility and went to Gurdwara, the Sikh House of Worship, every day. There he did seva, selfless service by making and serving food.

John Weisert wanted to celebrate his 50th wedding anniversary this fall. He has been with FedEx for over four years. He used to be a mechanical engineer and was considering retiring soon.

Amarjit Sekhon, who immigrated to the United States in 2004, left two young sons. She recently moved to be closer to her family and her family and friends describe her as a sweet person. They announced that she was preparing lentils at Gurdwara and serving food to visitors.

Matthew R. Alexander, a graduate of Butler University, worked for FedEx for many years. He had recently bought a new home in Indianapolis. His family and friends said he was a “perfect friend”.

Samaria Blackwell was a 19-year-old soccer player and wanted to become a police officer in the future. She was a “caring daughter,” her parents said. She also enjoyed spending her time serving the older generation.

Karli Smith, also 19 years old, loved playing softball and listening to hip-hop music. She recently graduated from high school. Her loved ones said she always knew how to make someone smile.

Jaswinder Kaur, another victim of the attack, looked forward to receiving her license soon. She was also preparing to make her special yogurt for her granddaughter’s second birthday.

Amarjit Johal, a FedEx employee of around four years old, was the matriarch of her family. She came to the United States decades ago to be closer to her children and grandchildren. That night she was waiting to be picked up and to celebrate a relative’s birthday. Her granddaughter said she didn’t have to work, but she preferred to do something on her own instead of staying at home.

Millions across the country mourn loved ones. Communities stand together and help one another through the pain and trauma that this tragedy has caused. Although the shooting at the FedEx ground facility in Indianapolis was not classified as a hate crime, communities like the Sikh community still feel targeted. The Sagittarius searched the white supremacist websites last year.

Brandon Hole, who is able to buy two assault rifles after becoming mentally ill and taking a gun away, is a clear flaw in the system and the communities affected are in pain and still need justice.

Gurman Sidhu is a freshman in Neurobiology, Physiology, and Behavior at UC Davis in Union City, California.